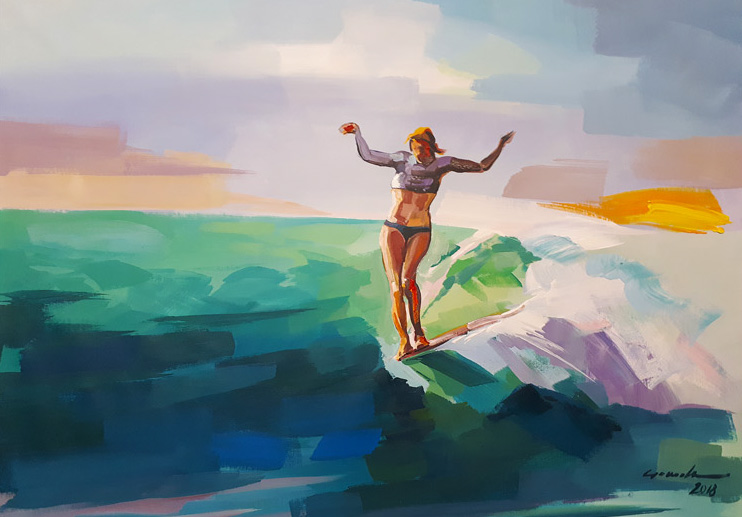 Surf art is the visual arts about or connected to surfing, waves, and beach culture.

The term “surf art” refers to all forms of visual art dedicated to surf culture.

There's a lot of crossover between art and surf culture, which is why some of the best contemporary surf artists are listed below.

Also check out our guide to who is the best longboard shaper?

Bree Poort is a visual artist from the Hawaiian island of Oahu.

She studied art at university in Hawaii before moving there when she was eighteen years old.

She began her career as a resin artist just before graduating in 2016, and now sells her work throughout the island in local cafés, galleries, and boutiques.

She got her start working with Adidas on women's shoes for a charity, painting surfboards, and painting 30-square-foot sections on commission.

Resin art works by Bree are inspired by the colors and patterns she sees while surfing.

Bree typically paints between five to seven layers of resin on each piece before adding a final glass coating.

By captures her unique perspective of the world, Bree hopes to provoke feelings peace and clarity in those who view her work.

John Severson was interested in the surfing culture of Southern California from a young age.

In the 1950s, he became one of the first artists to devote his life's work to this distinct way of life.

Since then, he has produced a steady stream of oil paintings, watercolors, sketches, and prints that convey the essence of surf culture.

If you're a fan of surfing, then chances are that you're familiar with John Severson's work.

He is considered by many to be the world's greatest surf culture artist and has created some of the most popular surf movies ever made, including Surf Safari, Surf Fever, Big Wednesday, and Pacific Vibrations.

His movie posters are treasured by surfers all around the world.

John's work as a filmmaker and artist has been exhibited internationally in publications, galleries, and exhibitions.

There is no one who has conveyed the excitement of looking for waves or surfing huge ones better than John – he's an authentic original whose work will endure through time.

Marc has a long history in design and technology, having worked with companies like YouTube and Google before starting his own.

Vincenzo Ganadu was born in Sassari, Italy in 1973.

He attended the Istituto d’Arte and his work is displayed in public and private galleries domestically and internationally.

His pieces reflect his homeland with cyclical waves that ebb along a sea of visible turmoil.

The chromatic structures are well within a designed geometry of tones which accentuate the color contrast for full effect.”

The human figure is posed in these backgrounds by Ganadu.

The woman's gesture of balancing on the waves of a longboard creates movement and animation in the observer due to the brush strokes of color used.

No contour lines were necessary.

Wade Koniakowsky is a well-known ocean art artist in the United States.

He began painting when he was 6 years old and began surfing before he was 12.

By combining his two passions, he became known across the world for his surf art oil paintings of tropical interpretations.

His work is currently on display in a number of high-end galleries around the world.

Wade's designs may frequently be seen in movies, television shows, and surf competitions.

Billabong has locations throughout the United States where his artwork may be purchased on custom surfboards.

With a marketing background, he has worked as Creative Director for Fortune 500 companies, winning over 300 creative honors in the process.

The Ocean Art gallery in Solana Beach is owned by Wade.

Annie Seaton is a Canadian-born artist who specializes in surf art.

Her work has been exhibited around the world, including in her home country of Canada and her current residence of Sherman Oaks, California.

In the 1980s, Spencer Reynolds was a huge fan of surf media – the fashion outside world.

His inner realm was Southwest Oregon.

He was a kid in Brookings, Oregon, situated six miles from California's wet coast.

This wasn't your typical surfer's paradise.

It was cold and rainy there.

There were big waves and rocks to navigate around as well as closeouts that could suck you out to sea if you're not careful.

However, this isn't fishing for Reynolds (although he doesn't do it).

Instead, he draws pictures with his art supplies on pieces of paper towel rolls he snags at restaurants or hotel rooms when they're empty (which is pretty often since most people don't want someone else cleaning up after them).

He still paints in his sylvan hillside studio, situated above the Chetco River.

This provides him picturesque views that often inspire him to continue working on perfectionism within his art.

However, he also has a clean midtown gallery called Semi-Aquatic which is another place where he spends time working hard on producing new pieces of art.

Life and family led him back to the coast 2008 after being cast away and he hasn't left since; Natal homing drew him back like salmon are drawn to the river they were born in – The Chetco River

By freezing moments of stunning natural beauty and power from the sea, he often Makes viewers remember forgotten feelings or emotions they have towards the ocean.

Scott is also a huge supporter for ocean conservation who speaks out about environmental problems to try to shift public opinion instead of just going along with what everyone else does.